These postings are a combination of basic forms of address for frequently encountered officials and replies to questions sent to Robert Hickey, Deputy Director of The Protocol School of Washington® and author of Honor & Respect: the Official Guide to Names, Titles, and Forms of Address.

The book is over 550 pages of government, military, religious, diplomatic and other forms of address.   What is on the site is but a small fraction of what’s in the book. For more correct forms of address for other official on invitations, place cards, name badges, introductions, conversation, and all other formal uses, refer to Honor & Respect: the Official Guide to Names, Titles, and Forms of Address.

Click to see who is already using Honor & Respect.

On every page on the right (on desktops and laptops at least) there is a list of every post on the site. Here are the recently top-ranked ones. 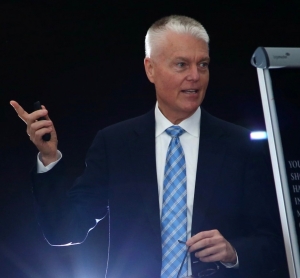 Robert Hickey is Deputy Director of
The Protocol School of Washington®
and has been conducting
protocol trainings since 1988. 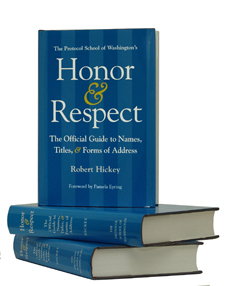 How to Address an Assistant Secretary of Health, USPHS?

Dear WD,
In the U.S. Public Health Service the highest officials:
—–#1) Have a naval rank
—–#2) Are appointed by the President (POTUS)
—–#3) Are individually confirmed by the U.S. Senate
—–#4) The Assistant Secretary of Health does not necessarily choose to wear a uniform while in office. If the official chooses not to wear a uniform address as the Honorable (first example below). If the official chooses to wear the uniform address as admiral (second example).
—–And finally,  even though it’s unusual to be the Honorable and have a rank, the same rules apply: It’s either the Rank -or- the Honorable – never both at the same time.  Below are two options for the official envelope – both are correct.  The Assistant Secretary for Health has the rank of Admiral and can be addressed by rank or as the Honorable, as shown below.

NOTE: On the U.S. Public Health Service website’s leadership page they identify the Assistant Secretary for Health, Principal Deputy Assistant Secretary for Health, Surgeon General, Deputy Surgeon General, and Director, Commissioned Corps Headquarters as (Rank) (Name), (Post-nominals for degrees, licenses and memberships).  E.g., Admiral (Full Name), MD or Rear Admiral (Full Name), MD, JD, MPH.
—–I have never seen a U.S. government style book that recommended a military rank with a post-nominal other that branch of service.  Never an academic degree. Never a license. Never a membership.  I imagine they want to emphasize that they are healthcare professionals. But using a branch of service post-nominal such as USPHS would define that like a U.S. Navy physician uses USNMC — United States Navy Medical Corps.
—–I wonder if it’s an internal convention within only the Public Health Service?
—–All that said, if any of these leaders were my guest and I had to list their name on a program, I would list their names as the USPHS presents their name.  But I would not assume any other organization follows this unusual style.
—–— Robert Hickey
How to Address a Assistant Secretary  How to Address the Public Health Service

And while we are on the subject…

The Principal Deputy Assistant Secretary for Health has the rank of Rear Admiral and can be addressed by rank as shown below.

— Robert Hickey How to Address the Public Health Service

The Protocol School of Washington (PSOW) was founded in 1988 and offers open-enrollment, classroom-based programs where students learn to become a licensed Intercultural Etiquette and Protocol Trainer, or can earn a certificate in operational protocol by completing Protocol Officer Training. Private, on-site training is also available to provide tailored training solutions. In 2020, PSOW launched online, instructor-led training to meet the needs of students worldwide.

Protocol and Diplomacy International – Protocol Officers Association promotes the protocol profession and raise awareness of its central role in business and diplomacy through education and networking. PDI-POA’s mission is to share the highest level of collective expertise, training, information and advice regarding accepted rules of protocol. PDI-POA is committed to facilitating communication, understanding and cooperation among individuals, governments and cultures around the globe.